Hey y'all!  Sorry I've been inactive here for a bit...life happens...  Anyway, I thought it might be good to at least announce a few tidbits.


The Sounds Of Fahrfall
In an earlier post, I released an Alpha Test version of Fahrfall.  That release originally included a disk image which can be used either in an emulator or with DriveWire or which can be converted into an actual diskette for use on a real CoCo.  But, not everyone with a CoCo has enough hardware laying around to make use of those options and they may not be satisfied with using an emulator.  So, I used the Toolshed tools to make an audio file available that can be used to load Fahrfall through the cassette interface built-in to every CoCo!

Also, in order to satisfy my own curiosity I set-up my Tano Dragon (a CoCo "clone").  I was able to use the audio file above to load Fahrfall on this American-ized Dragon without any problems -- hooray!

Ready For The Road
In another earlier post, I mentioned that I had plans to take Fahrfall on the road a bit.  For years I have made a habit of going to the annual "Last" Chicago CoCoFEST!, and I have often taken one or more CoCo systems along with me.  Impromptu packing strategies are workable for one trip per year, but I wanted something more durable for this year's activities.  To me, nothing says "durable" like a Pelican case. 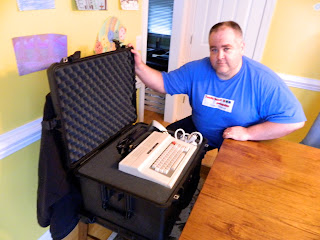 I chose the Pelican 1620 because it was the biggest case that was still small enough not to automatically qualify as "oversize" with most airlines.  With a 20" LCD monitor, a CoCo2, a CoCo3, and some misc support hardware, it will probably still be "overweight".  Hopefully I can still take it on an airplane if I need to do so.

Where I live, a group of us are trying to establish a "makerspace" (aka "hackerspace").  We do not yet have an actual space, so for now we have formed a club that we call the Alamance Makers Guild.  The club has regular meetings, and at the last meeting I did a little show-n-tell session about Fahrfall.  Our club leader Ben Harris took some video which he then edited and posted.


IMHO, Ben did a great job on the video.  You should also check-out some of the stuff he offers through his business Harris Educational.  If nothing else, buy one of his t-shirts! :-)


Vintage Computer Festival East 8.0
I have added an event to my Fahrfall road show!  For those on the east coast of the USA, make plans to attend VCF East 8.0 on May 5th and 6th, 2012.  Why?  Because Fahrfall will be on exhibit there!  Seriously, come out and tell me how much you love Fahrfall! :-)


So Long For Now
Well, those are the current highlights.  On top of that, I have recently spoken to a reporter for the local news paper.  I expect Fahrfall to be mentioned in the Burlington Times-News sometime soon -- how exciting!  Sometimes it pays to live in a more rural area...

Anyway, now you should grab the Alpha Test release and give it a go.  Let me hear from you!
Posted by John W. Linville at 9:50 PM