OK, so I haven't quite decompressed from my work on Fahrfall.  In fact, I decided that I needed a Fahrfall t-shirt!

Capturing Graphics
I hacked-up a dummy version of the Fahrfall code.  This version cycles through just enough title screen frame sequences to get all of the "FAHRFALL" bits onto the screen.  It also skips printing the copyright info and the "PUSH BUTTON" message.  But, it does put both the falling and standing versions of Fahrve onto the screen.

I loaded that version of Fahrfall into MESS and I let it run.  I then used the GNOME screen capture utility on my Fedora desktop to cut-out the title and the Fahrve variants.  These looked alright, but they needed a little processing.


Magic In Me
The custom t-shirt sites are fairly easy to use, but they don't seem to be very good at resizing graphics.  The Fahrve images looked fine, but they were a bit small.  I used the ImageMagick 'convert' utility to make them quite a bit bigger.  Once they were resized, you could see that there had been some dithering along the way -- Fahrve looked really blurry!  I added an option to 'convert' to sharpen the image somewhat, and it looks OK now.

Another problem with the screenshots was the opaque black background.  That doesn't sound like a problem, but when you put it on a t-shirt you will have a big square area of black that probably won't match the t-shirt beneath it.  Luckily, 'convert' understands transparency (at least for PNG images).  So I added another option to the 'convert' invocation and the opaque black backgrounds disappeared. 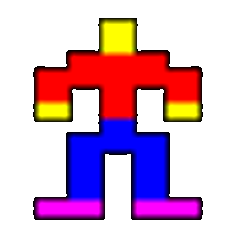 Customized Goodness
I visited the CafePress site and found their custom t-shirt offerings.  Their online design software is fairly easy to use.  I uploaded my graphics, added some text to plug the blog you are reading, and moved stuff around a bit.  My t-shirt is on it's way!

If you are a Fahrfall fan and you want to show your true colors, then feel free to order a copy of my design!  I don't have any relationship with CafePress (other than as a customer), so I won't make any money off your purchase.  I doubt many people will pay the full price for a custom t-shirt anyway.  Still, I would love to see someone sporting Fahrve on their back! :-)

Maybe someday Fahrfall will be popular enough to merit bulk merchandise production?  That would be cool... :-)
Posted by John W. Linville at 7:58 PM