In the "Shaping Up" post, I glossed over the creation of the PCBs for the Fahrfall cartridges.  These didn't just fall from the sky and you can't run down to Radio Shack to get them either!  So, let's cover this topic...

The circuit board for a game cartridge tends to be just a simple "carrier board" for the EPROM containing the game.  More advanced cartridges exist, even for the CoCo.  But the starting point is just enough circuitry to support attachment of a memory chip to the computer.

Mark J. Blair, a member of the CoCo mailing list, designed such a board a while back and made it available for ordering through OSH Park.  He even went a step further and made the design files available through GitHub.  So if you need to make a ROM cartridge for a CoCo in a hurry, then now you know a good way to get the PCBs!

The boards from OSH Park are great, and the service is good.  But the prices seem a little high and I wanted to checkout some alternatives anyway.  I found Hackvana, which offers a variety of options at different price points.  I decided to use a green soldermask with the RoHS Pb-free solder finish, and I got a run of boards at a much cheaper price per board.  The boards look and work great, so I couldn't be happier.  (Note that the gold immersion finish would put the per board price much closer to the price available from OSH Park.) 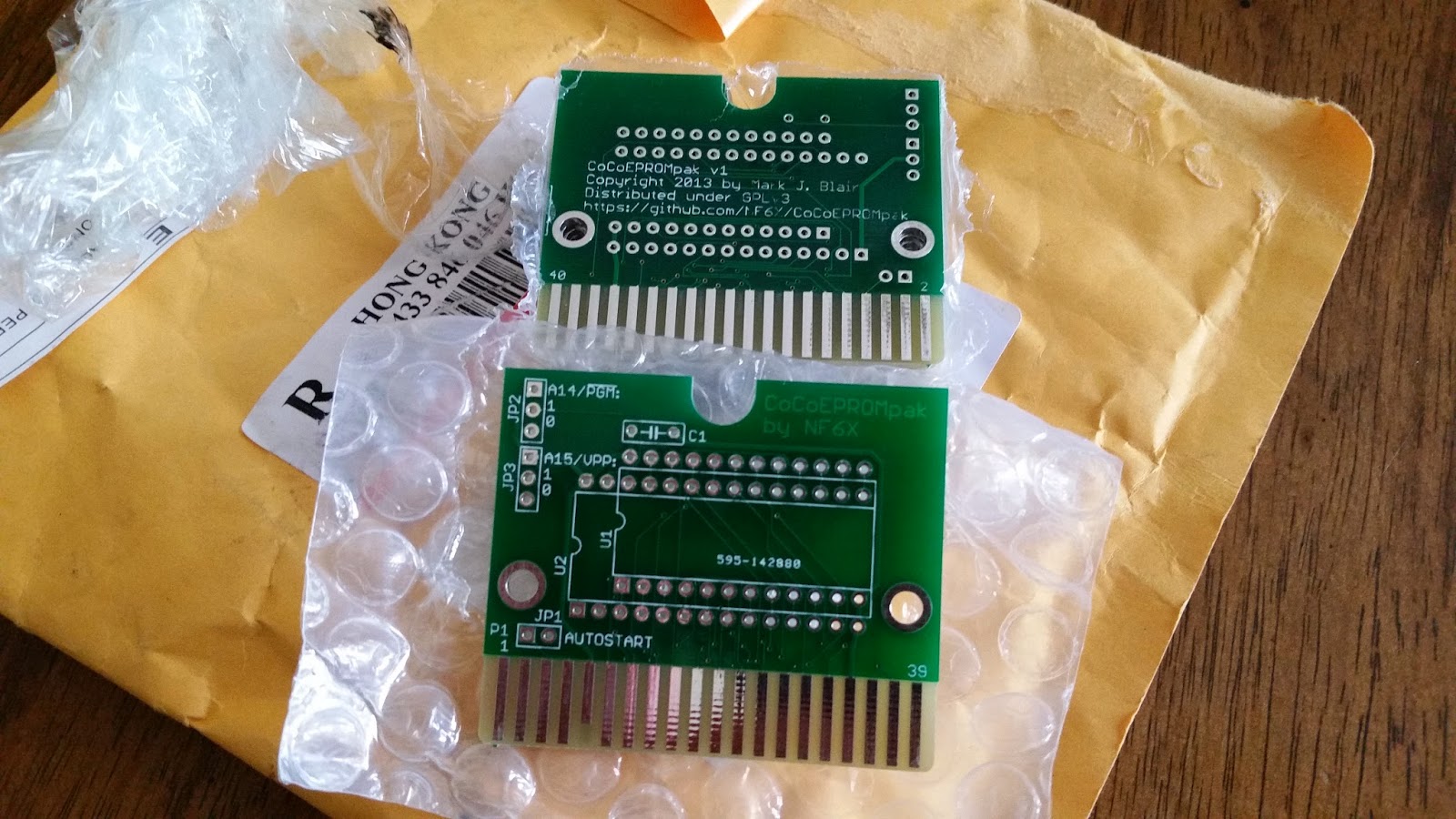 Each board manufacturer tends to have slightly different preferences or requirements for how board designs are sent to them, and the Hackvana folks are no different.  Mark used the Eagle PCB design software for his design, and Hackvana offers some design rules files for Eagle on their site.  Fortunately the CadSoft folks also offer a free-as-in-beer Linux version of the Eagle software, and I was able to load the Hackvana rules into Mark's design files.  I then used another Eagle script from Hackvana to produce the required Gerber files.

Since Mark's design is released under GPLv3, I have released a tarball at the link above with my Hackvana adaptation of Mark's design.  The orginial OSH Park Gerber files are still there if you need them as well.

Building the PCB is as simple as the design itself.  There are barely any parts at all!  The first step is to install the IC socket.  This is not strictly necessary, but it does make it much easier to replace the EPROM if you want to burn a new release of Fahrfall! :-)  Also included is a small capacitor used to stabilize the power supply for the EPROM.

Mark's design can accomodate a variety of EPROM parts.  This gives some flexibility on how to populate the board, but it does require an extra step when building the cartridge hardware.  In order to accomodate different chip types, there are actually two socket locations on the board.  Choosing is not difficult -- use the one that matches the number of pins on the EPROM...

Slightly more difficult is handling the jumpers.  Mark's schematic describes how the jumpers should be set for the various EPROM options.  The PCB is intended to use removable jumpers on pin headers, but I didn't want to bother with those for this project.  Instead, I just did a little sloppy soldering and bridged the connections I wanted.  This saves me a little bit of wire trimming or parts acquisition and placement, at the cost of a little more trouble if I want to reuse the board with another EPROM later.  But really, who would ever want to replace Fahrfall??

The final step is to install the EPROM programmed with the Fahrfall code.  This requires some hardware that most people don't have.  Fortunately for me, I acquired a nice MOD-EMUP-A almost 20 years ago when I was a more active arcade collector.  I really like it, with the only caveat being that it requires an ISA card to interface to a PC running MS-DOS.  But, it works great for retro project hacking -- get one if you can! ;-) 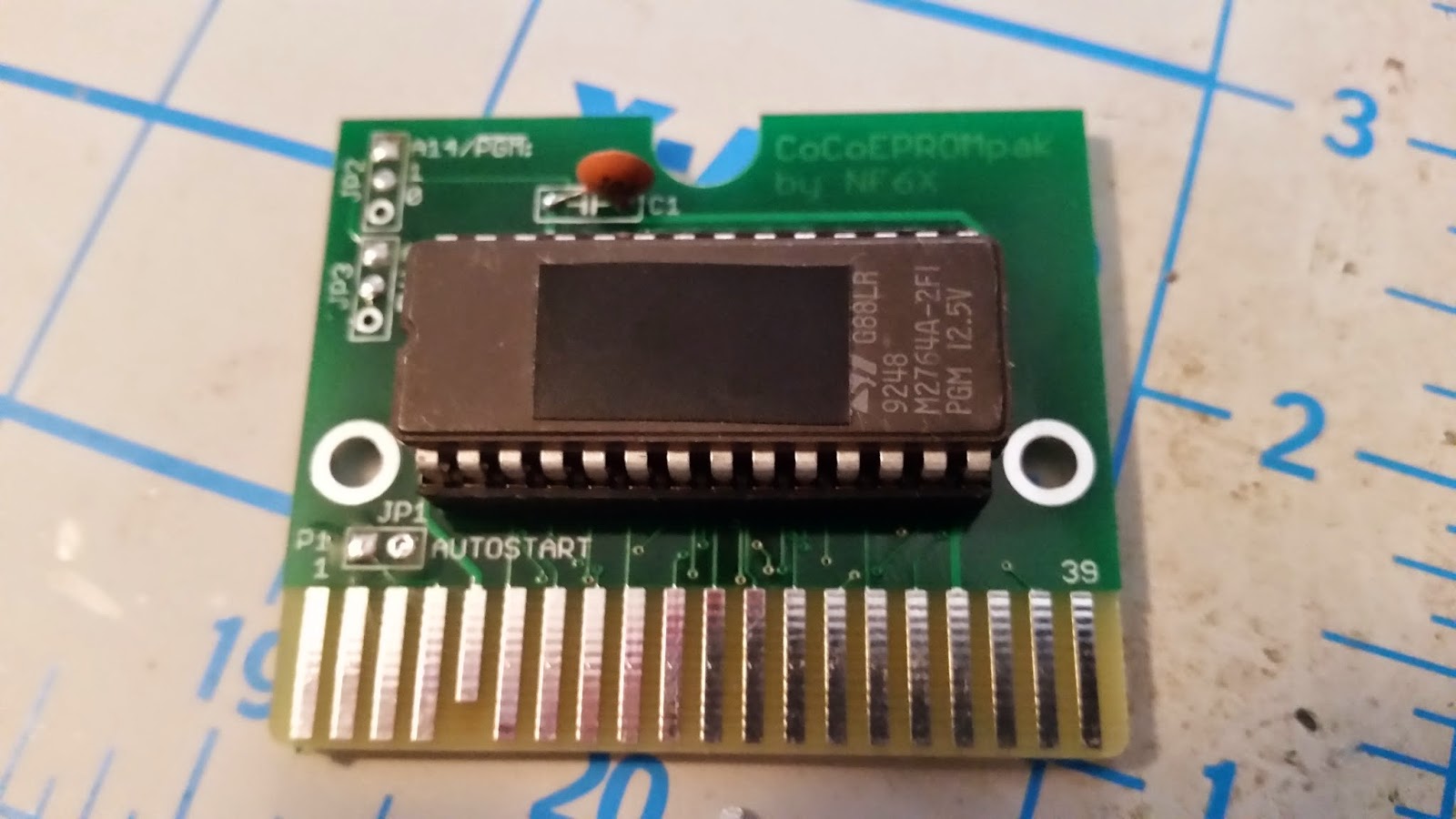 Anyway, that about sums-up the PCB build.  From here the PCB is mounted in the cartridge case as shown in the earlier post.  It really is cool to see Fahrfall start as soon as you power-up the CoCo, and the slightly faster clocking available when running from ROM makes the audio sound a bit better as well.  I know I'm excited!  Hopefully you are excited enough to stay tuned...
Posted by John W. Linville at 4:44 PM